The Very Hungry Zombie: A Tale of Ravenous Reanimation

My bestie Alicia VanNoy Call (aka Lee) wrote and illustrated an extremely cute, genius, and hilarious children's story app (for iphone and ipad) back when I wrote my "Kitty Wants" app, about a zombie who swallows one thing after another desperate for relief - it's a play off "There was an old woman who swallowed a fly."  It's cute, and I can't help laughing out loud when I read it. 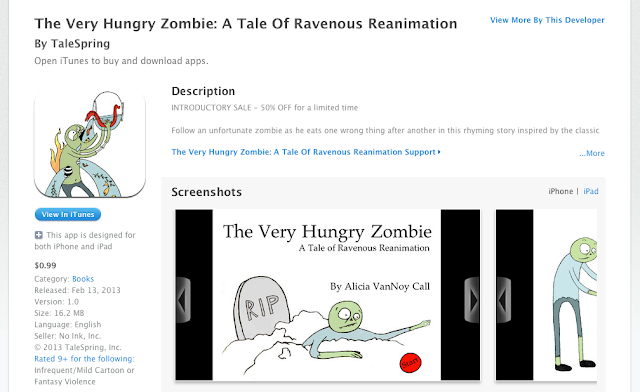 We created them together for the same Children's Book Illustration class we were both taking, and we both used "TaleSpring.com" as our platform.  In December we both entered our finished apps in Tale Spring's contest for the best app between three schools: UVU, BYU, and one other school I'd never heard of.  Guess who won?  :D  My bestie!  Congrats Lee!

In "The Very Hungry Zombie: A Tale of Ravenous Reanimation" the animated zombie eats a statue's head, a jackhammer to break up the head, some glue to still the jackhammer, some fire to melt the glue, and gets more and more hilarious (or worse and worse for poor zombie!).....  It's narrated by her adorable kids whose voices add much to the playful cuteness.  Every time she showed us the latest progress in class, everyone was laughing.  Hope you enjoy!!