I'm going to show you what I just went through trying to figure out how to put this break dancing hippo page together....

I have different examples of him dancing, so I didn't worry about a detailed background (with leaves n trees n such n such)

So at first I did this: 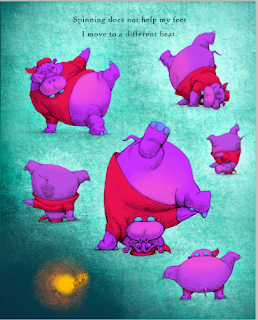 But felt the background was too distracting.... especially next to the page it's next to in the book.
(I'll show you that in a sec)

So then I switched to this: 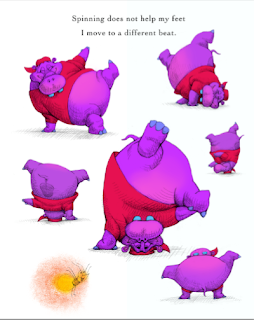 But that felt too plain.

So I gave them colorful shadows: 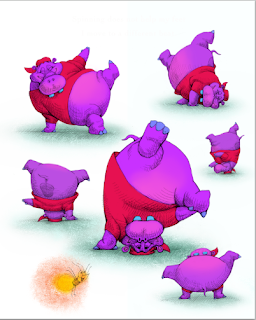 I liked that a lot.

I was about to move on... but I was worried about how the bug doesn't "glow" because he's not against anything dark.  I remembered that previously I had painted the bug page like this: 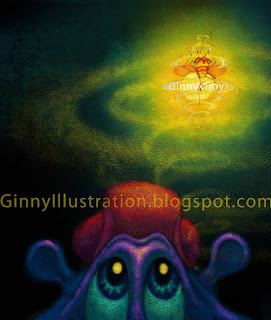 So then I was like, "Okay, I better stay CONSISTENT to retain CONTINUITY (remember when we learned about that?)

So now I have this: 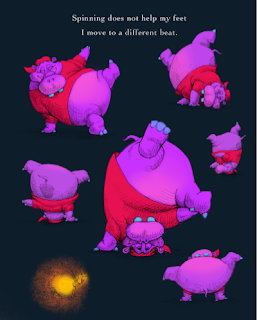 I'm about to go in and add the fun highlights and make it nice.

By the way, it's a good idea to paint your images next to the image that will be next to it in the book to make sure colors aren't clashing. 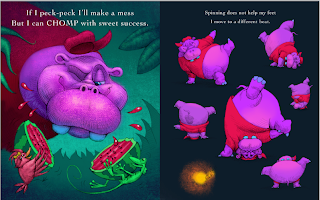 Alrighty, thought I'd let you learn from my learning.

Yes I know the texts are different sizes.  The size will be like the page on the right, don't pay attention to the one on the left.  Yeah yeah I know... you're seeing my lazy artist mistakes showing through.  Also, if you're smarter than me, you would have had this background thing figured out before you started painting the final image.

But first watch this 3-year-old prodigy paint a ninja turtle: